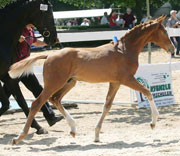 We sold Kastello by Köpenick–Weltmeyer–Atatürk at the foal elite auction to a well-known dressage stable. We wish the new owners good luck and a lot of fun with this sunshine boy. 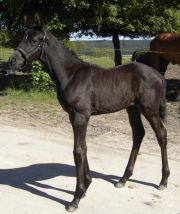 At the foal show in Wernau our filly by Sandro Hit–Donnerschwee– Alabaster impressed the audience with her extraordinary elegance and movement quality. She was admitted to the foal auction in Vechta. As this filly is not for sale we will raise her on our own and keep her as brood mare. Therefore we will not send her to the auction. All our foals received a premium and were admitted to the auctions of the Breeding Association.

All our foals born this year are healthy and all our mares are mated. We are looking forward to the foals by Sir Donnerhall, Köpenick, De Niro and Sandro Hit in 2007.

Colt by Köpenick – Weltmeyer – Atatürk – Shogun xx
At the foal show in Herrenburg our sunshine boy impressed the judges and received the gold medal. The colt was awarded top scores for type and movement. Furthermore he was admitted to the elite foal auction in Riedlingen on 31 August 2006. 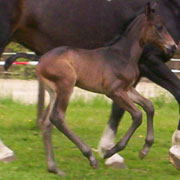 We just received the information that our brood mare „Donna Collina” who was sold to Sweden delivered a healthy filly by Samarant, her 8th foal, A filly who makes her new owners very proud. All the best wishes and good luck for your stable. 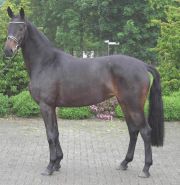 After having successfully competed in the mare performance test, our dam „Bonita” descending from Rohdiamant–De Niro–Manstein and which we bought as a filly, was awarded the title „Premium Mare” by the Breeding Association. The broodmare is in foal to top sire „Sir Donnerhall” (Schockemöhle stud) and will stay in our stable.

On a Sunday at 23 minutes past eleven this filly was delivered. A long-legged beauty with a charming face and elegant movement this young filly is so fascinating. With a pedigree including Sandro Hit–Donnerschwee– Alabaster this is no surprise. On the picture you will see our young being delivered only some hours before. 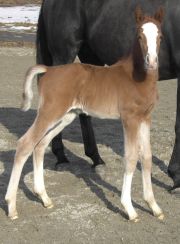 Today at 21.03 pm our state premium dam Weltlady delivered the colt „Kastello”. We were immediately attracted by this unique charisma combined with his bold look.
Being 5 days old on the picture he already knows how to pose. 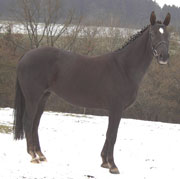 December 2005 – News from our broodmares

Our latest acquisition state premium and elite mare ”Coriana” is sired by Donnerschwee–Alabaster–Freiherr–Prinz Miro. Only after 3 breeding years she was awarded the ”Elite” premium. Coriana is descending from genius Donnerschwee. In 1986 Donnerschwee´s dam Weltwunder by Freiherr was nominated German champion dam in Aachen.
Coriana is a three-quarter sister to the current vice world champion (2005) of the 5-year old dressage horses, vice federal champion of the 4-year old stallions (2004) and current winner of the main premium Donnerball by Donnerhall. At the elite show in Rastede 2005 she finished on an excellent 6th place in the ”Brilliant Ring”. After having delivered extraordinary offspring by Sunnyboy and Florence the mare is in foal to top sire ”Sandro Hit” for 2006.
We would like to thank the Wiegert family from Groß Nemerow for putting their trust in us. And we also say thank you for having spent so many interesting days with us. 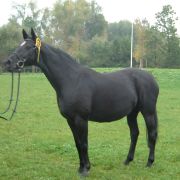 Today our broodmare Weltlady received the 1a-premium at the association show in Weilheim and thus leading her age group. Due to her sports successes and her excellent mare performance test as well as to her prize-awarded offspring she has now been awarded the title state premium mare. 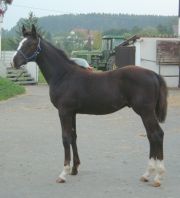 When attending the various foal shows the 2005 foals knew how to get the admiration of the crowd. Above all was our colt by Hohenstein–Colani– Donnerwetter who knew how to use his charm and thus received a top premium. The colt was sold to an ambitious dressage rider who bought our little Hennessy as prospect for the big dressage arena. The filly by Weltmeyer–Brentano II–Ludendorff will be raised by her new owner for breeding. 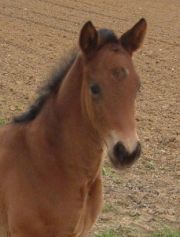 The brown filly by Weltmeyer–Brentano II–Ludendorff was delivered first. This filly is full of charm and has excellent basic gaits.
Only some weeks later the black colt was delivered by our broodmare Donna Colina. Sire by the Trakehner Hohenstein this colt is very true-type. You will find further details under ”Horses for sale”. 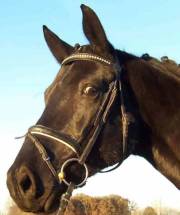 Right in time for Christmas we are looking forward to our mare Jolina descending from Rubinstein–Welt As–Furioso II. Her pedigree is full of superlatives such as Rubinstein. Welt As who can be found in the second generation has been one of the most important sires in the last years. He is also sire of the Olympic gold medal winner Bonfire with Anky van Grunsven. In the third generation you will find the famous Oldenburger stallion Furioso II.
With this mare a dream came true for us. For about two years we had been looking for a Rubinstein mare that has this dam line in the pedigree. As Jolina had already delivered several foals by Donnerhall and Fürst Heinrich we are quite sure that she will also deliver several foals with excellent paces in future. 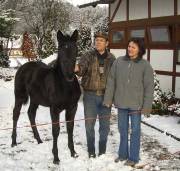 Today we took our little darling Cinderella F to her new owners. We are sure that the Ruoff family will have as much fun with this charming lady as we had in the previous months. It’s a pleasure to see this is a perfect match. 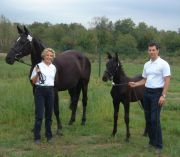 This year’s foal placed in the front positions. The colt by Sandro Hit – De Niro – Rubinstein presented himself in extraordinary manner and was awarded the mark 9.0 twice for type and movements. This colt will be raised as potential breeding stallion and will leave our stable at the end of September. We hope to see him at the stallion licensing in two years.
At the South Germany foal championships in Wernau our filly by Weltmeyer – Brentano II – Ludendorff was placed 4th in the final ring and thus just missed a spot on the podium.
In Forst our filly by Cleverboy – Weltmeyer – Atatürk was awarded the silver medal and received marks above average for type and movements. Our darling who we named Cinderella F will also leave us at the end of this year. We wish the new owner of this charming lady all the best for the future.

This morning our extraordinary broodmare ”Weltlady” delivered her first foal, a beautiful black filly by Cleverboy (Come on – Wunnenstein – Kornett II/T.) This filly is of exceptional beauty, highly elegant and with a few white hairs on the forehead. The picture was taken during the first days in the life of ”Cinderella F”.
We are really eager so see how her basic gaits will develop.

The first foals by Weltmeyer and Sandro Hit have been delivered. You will find pictures of these potential stars under ”Horses for sale”.

NEWS OF THE PAST YEARS